Skip to content
You Are Here: Home » Problems » Marine-toxic ingredients in personal care products
Defending the ocean for all life on Earth
Donate 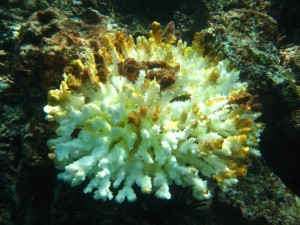 The marine-toxic ingredients contained in personal care products enter the ocean when, for example, they wash off the user during a shower, as well as via excretion, since some of them pass into the body and then out again into sewage. Even modern filtration systems do not prevent these pollutants entering the waste water system and making their way to the ocean.

Where the pollutants wash off directly into the ocean, for instance sunscreen applied on the beach, the effect is particularly damaging due to the high concentration at point of impact.

Measurements taken around coral reefs in Hawaii found levels of one such marine-toxic chemical, oxybenzone, at concentrations 12 times higher than the level at which it impacts juvenile coral.¹

The ingredients cause defects ranging from mortality to deformity and several behave as endocrine disrupters, interfering with a species’ ability to reproduce, even if it survives the exposure.

A related problem is the inclusion of plastic microbeads in some products. These persist in the ocean environment for thousands of years and act as a magnet to some pollutants that bind to them, leach their own chemical endocrine disruptors, and form tiny toxic time-bombs eaten by fish.

Scientists have been concerned about some of these chemical ingredients for a number of years and there is a growing body of literature on the subject. The relevant reports and the pollutants and the names they may appear under on a list of ingredients can be found here.

In the spring of 2016 the International Programme on the State of the Ocean (IPSO) (which helped to found MarineSafe), the International Union for Conservation of Nature (IUCN) and the World Commission on Protected Areas held a specialist workshop concentrating on pollution from personal care products. The workshop re-affirmed the need for action on this escalating cause of ocean degradation and set out a scientific plan. The main findings of the workshop and its recommendations for action are here. 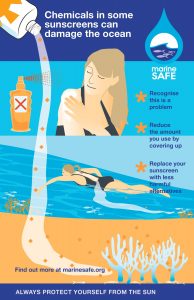